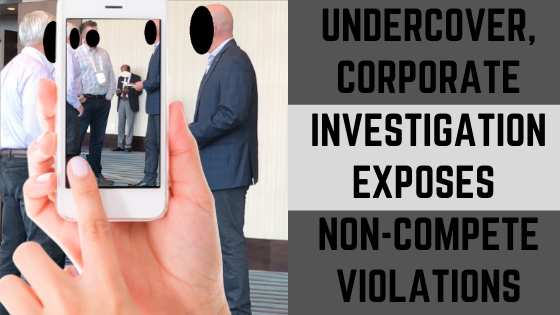 To Compete or Non-Compete.

If you are employed (or ever have been), more than likely you’ve been part of some type of confidentiality agreement or non-compete agreement. Right?

If you’re an employer, you already know why confidentiality agreements and non-compete agreements are vital to your business.

But for the employees and all those skeptics out there, imagine this:

You own your own company. You’ve spent years of your life and tons of money building and developing a process that is unique and profitable for your business.

You should be protective of the sensitive data, trade secrets, and client relationships you’ve cultivated, right?

Take it a step further and imagine some of your employees have access to your sensitive data and trade secrets.

Safe to say one could become very concerned.

So, as an employer, what do you do when you suspect an employee of sharing your secrets?

You hire a professional private investigator.

So, what’s the story?

In this particular case, upon suspicions of an employee sharing company secrets, the Canadian corporation (employer) skipped the investigation and straight up fired the guy.

WELL, my guess is, if he wasn’t already poaching clients and sharing secrets, he definitely is going to start now!

Let’s get to the facts.

The former employee was radio silent.

Perhaps unsurprisingly, suspicions grew stronger and the employer was determined to find out where the ex-employee was, what he was doing, and with whom.

You’re probably wondering, how did TIN come into the picture?

As it turns out, the corporation had knowledge of the former employee’s schedule, which included plans to attend an industry-related conference in Houston, Texas.  This conference had over 200 registered attendees, several of whom were major competitors and clients of our Canadian client. The conference was to take place in just two, short days.

Can you say URGENT?

But hang on a minute.

How are we supposed to fit in at a conference in a highly-technical, specialized industry that we know virtually nothing about?

As if all that’s not enough, did I mention the conference is extremely exclusive and completely sold out?  Not only do we have to fit in, but first we have to GET in.

Good thing our investigators never run from a challenge.

In order to gain access to the conference to discreetly observe and capture all of our Subject’s activities, our Investigators had to come up with a clever way to talk our way into this conference.

Fast forward to day one of the conference.

There we were — four TIN Investigators — in the lobby of this downtown hotel.  One by one our Investigators attempted to gain access to the exclusive conference.

With only one failed attempt *AWKWARD* we got two investigators inside.

You’re probably wondering what our plan was for the other two.  The other two Investigators were needed to watch the exits, ready to follow our Subject on foot or by vehicle if he attempted to make a quick escape with a competitor.

With so many moving parts, Investigators have to prepare.

Prepared we were! In fact, we were so prepared that over the course of the next two days, our Investigators saw a ton of action.

He talked with just about everyone.

Here’s a discreetly captured image of our Subject striking up conversation with other attendees during our field investigation.

Our Subject is sending out friend requests to conference speakers during and immediately after their session.

You read that correctly.

While sharing an elevator with one of our Investigators, our Subject unexpectedly initiated a conversation.

He handed our Investigator a business card!

Our Subject’s business card listed himself in a management position for another company in the industry! not even two weeks post-termination – I think just about anyone would suspect a little overlap.

Here’s a discreetly taken photo of our Subject self-promoting and handing out his business cards to another attendee.

Ex-employee approaches a major client of his former employer.

And we got it all on video.

Investigators captured our Subject approaching a major client of his former employer and engaging in conversation.

Going the extra mile for peace of mind.

With evidence in hand, at the end of the conference, Investigators conducted covert, mobile surveillance of our Subject following him 30 miles outside of Houston in order to confirm he was not meeting any attendees or competitors from the conference.

A corporate client hired us to conduct an undercover investigation on a recently terminated employee.

They suspected this ex-employee of sharing proprietary information with competitors and poaching clients, which violated his non-compete agreement.

This clearly violated his non-compete agreement.

Ultimately, we armed our client with work product in the form of photos, videos, and detailed reports.

Our work product validated their suspicions as to the Subject’s continued, active involvement within the industry and his ongoing communications with our client’s competitors and clients.

As an employer, you want to be sure your employees and former employees are upholding their end of the non-compete agreement.

Hiring a private investigator upon suspicions can bring peace of mind to you and your company. On the other hand, hiring a private investigator to conduct an undercover field investigation could provide valuable evidence of violations. If necessary, this evidence will come in handy when filing and winning a lawsuit over a non-compete violation, confidentiality contract dispute, and intellectual property theft.

It’s your business. Don’t you want to keep it that way?