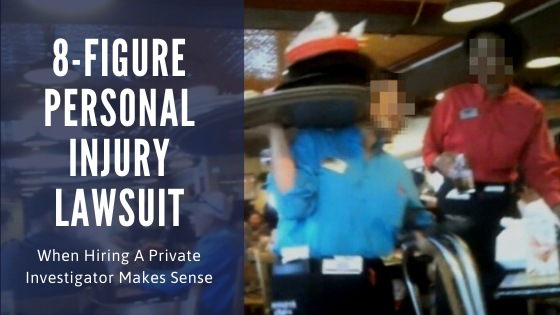 As most insurance defense attorneys will agree, stakes are high when a plaintiff is alleging traumatic brain and physical injuries. So high that hiring a private surveillance investigator often comes to mind.

Think about it. The demand was for eight figures in this personal injury lawsuit.

That’s a lot of money. In fact, I would dare to say that just about everyone can agree demanding ten million dollars raises the stakes.

That’s usually when we come into the picture.

A private investigator can conduct a personal injury investigation that can include:

This multi-faceted approach will uncover the truth and ultimately provide court-admissible reports and video when you hire the right investigations agency.

Granted the truth won’t always set you free of those eight figures… but in our experience, plaintiffs often are not as injured as they claim to be.

By now you might be wondering what this case was about. Well, let’s jump in!

You want how much money?

A law firm client retained us to conduct covert, mobile surveillance of a plaintiff in a personal injury lawsuit.
This subject claimed that she will require extensive medical care over the course of her lifetime – ergo, the 10MM demand.

As a result, our client desperately needed to know the truth about her current physical capabilities, any employment limitations she may have, and any restrictions in her daily, routine activities.

So, what’s the real story?

As it turns out, within the first week, TIN surveillance investigators captured the following: 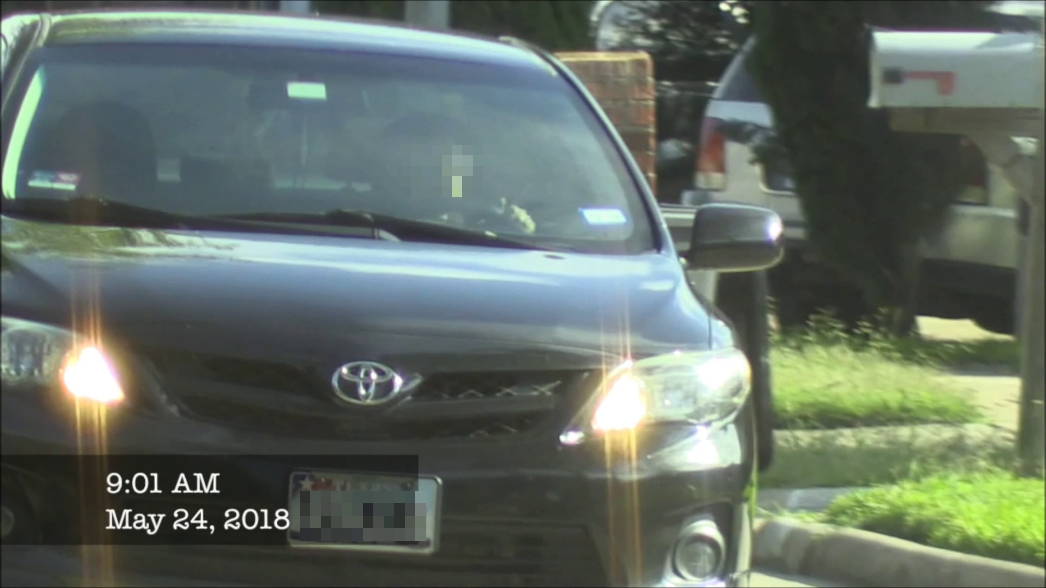 If I may say so, it’s hard enough for most healthy people to drive safely in a busy city with so many distractions* (just wait for the kicker down below) but driving daily with a traumatic brain injury?! Now that’s concerning… for everyone involved!

Now get this: As we conducted and monitored her social media accounts, we even came across a video taken by our Plaintiff of herself while operating her vehicle!

Can you believe it?! Video selfie while driving?

YIKES! If that’s not a complete distraction I don’t know what is.

We all know that spending money before getting it is not the best idea.

These photos may look innocent. They may look exactly like any 20-year-old girl’s activities on a Saturday night: meeting up with friends, staying out until after midnight.

Well, not if you’re claiming traumatic brain and physical injuries.

For those of you who have never worked in a restaurant, waiting tables is harder than it looks. Here is our Plaintiff making it look easy.

Here is our Plaintiff carrying a tray with AT LEAST 3 full glasses.

Yup! You read that correctly.

Don’t believe me? See for yourself.

**Another great example of a TIN surveillance investigator making excellent use of some quality, covert camera equipment.

As if that’s not enough, that’s just part of the story!

Let me remind you, TIN Investigators have been concurrently monitoring, both closely and legally, the Plaintiff’s social media accounts. Particularly her Twitter account.

As you can probably imagine the more active and less private a social media account, the better.
Does it make the researching and monitoring process much more tedious and time consuming?

Absolutely! But that’s why you hire us.

Here’s a brief outline of how researching the plaintiff’s social media added value to this surveillance investigation.

We were able to identify the subject as well as some close family members and potential roommates. This helped us so on the first day of surveillance we knew exactly who we were looking for!

We were able to relatively quickly learn more about the Subject, where she worked, liked to hang out, etc. This enabled us to get a feel for the parts of town the subject frequents.

I saved the best for last. When a plaintiff adds him/herself to a public event coming up, it really helps Investigators set an efficient schedule for the upcoming days. And this is exactly what happened during this case. Planning ahead is more common on platforms like Facebook and Twitter.

What exactly did we find?

TIN investigators identified several posts each day that gave more and more insight into just how “normal” this girl really is.

Although anyone can scroll through this Plaintiff’s public Twitter account and loosely paint a picture of who she is, where she works, and what she does for fun… not everyone has the patience and tact to sift through the online data dump of the contents of a millennial’s mind and extract the following pertinent information.

I know what you’re thinking.

It really doesn’t look like much, but needless to say, we were onto something. Even though we were not quite sure how “dope” it actually was just yet.

This was our moment.

As I mentioned before, the planning ahead aspect of Facebook and Twitter allows an investigator to plan surveillance around known and potential upcoming events.

In this case, the timely communication to the client regarding our social media research findings, a.k.a. “dope”, allowed for the authorization of a few more crucial days of surveillance with a concentration on the upcoming weekend.

We discreetly tailed the Plaintiff to an outdoor event venue.

Here we were, setting up stationary vehicle surveillance of our Plaintiff at the venue and while she was setting up for a huge event. 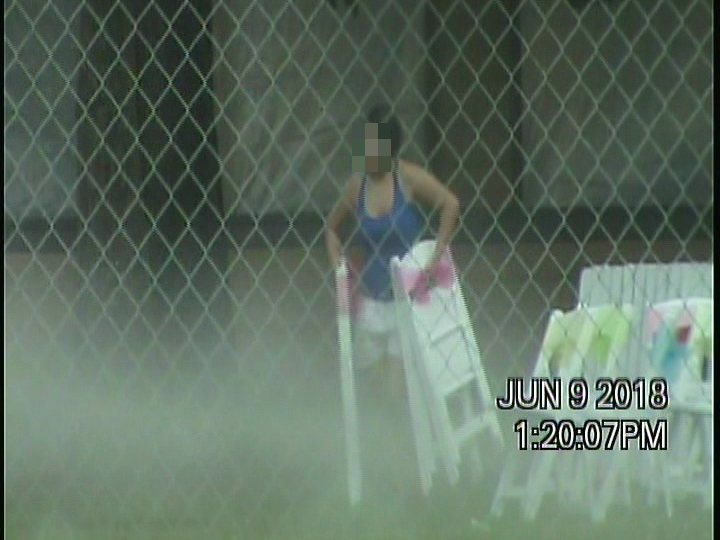 Surveillance Finding *Bonus* setting up for a huge eventCan you believe it?

She was actually setting up real decorations and unloading rental furniture (granted, the items were mostly chairs) for an outdoor wedding, attending this wedding, cleaning up after the ceremony, and later that night, dancing with friends at this same wedding.

However, these additional surveillance days allowed us, TIN Investigators, to obtain an amazing, yet discreet, surveillance video of the dope weekend.

Our client, a law firm, hired us to conduct covert surveillance of a plaintiff (Subject) in personal injury lawsuit.

The Subject was demanding payment in the amount of eight (8) figures due to an auto accident that allegedly, resulted in traumatic brain and physical injuries. The Subject alleged that she would require extensive medical care over the course of her lifetime, as a result of this accident.

Our client needed to know the truth in connection with the Subject’s allegations specifically, her current physical capabilities, any employment limitations she may have, and/or if she demonstrates any restrictions while carrying out daily, routine activities.

TIN Investigators observed our Subject driving a vehicle, waiting tables, exercising in a gym, shopping, attending social gatherings with friends, unloading and setting up rental furniture and decorations for an outdoor wedding, attending the wedding, and later that night, dancing with friends at this same wedding.

TIN’s multi-faceted approach to conducting personal injury investigations included covert, mobile surveillance as well as social media research. After presenting our client with discreetly obtained surveillance video and a comprehensive social media report, it was very gratifying to hear that this case had settled “for a fraction” of the eight (8) figures which had been originally sought when the lawsuit was filed.

So, what’s the moral of the story?

Quite simple. If you are a civil defense attorney, make sure you hire a professional, licensed private investigator who will provide court-admissible evidence to add to your case.

Isn’t that what you want?

You really can’t afford not to.

The good news is TIN handles surveillance investigations all over the state of Texas, Louisiana, California, New York, Oklahoma, and many other states from coast to coast.  Give us a call to find out if we can help you with your case.